Koehler holds an MFA (Master of Fine Arts) with an emphasis in fiber as well as an MS degree in secondary art education.  Also holding two bachelors degrees in art and elementary education, she has extensive experience as a workshop presenter.  She has taught all ages of students ranging from pre-K through Elderhostel and served as a trainer and conference presenter for the Mississippi Department of Education.

As a performer, Koehler has performed at several high profile venues including CelticFest Mississippi and O'Flaherty's Irish Music Retreat.  Her performances blend history and contemporary humor with a balance of trad (sean nos) singing and stories guaranteed to be shared over and over.  She recently won the Kathleen O' Cannon Bardic Competition.

The path of time travel... 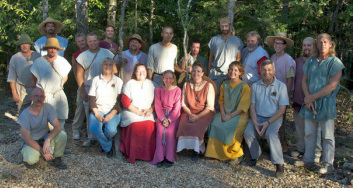 The inaugural crew of the Ozark Medieval Fortress, September, 2010.
_What began as a hobby has now become a working obsession for medievalist Catherine Koehler.   Like most young girls, Koehler was first exposed to the middle ages through the fairy tales of the Brothers Grimm, Hans Christian Anderson and the incredibly nostalgic illustrations of Tasha Tudor. Shortly after the birth of her first child in 1986, she happened upon a group of medieval fighters practicing in a public park.  Impressed that there were others who wanted to bring this marvelous age to life, medievalism became a lifetime goal, hobby, and eventual profession.

From May of 2010 until July of 2011, she was lucky enough to be included in the first crew assigned to build a 13th century French castle using only medieval methods and technology.  The excitement and energy of this project can be seen throughout the many photographs used in headers and illustrations on the Medieval Lassie website. Currently the castle project has been placed on hiatus awaiting additional funding, but this has turned Koehler’s focus from the safety of a village to the level of a Crusade.  School children and group members alike are being awed by the simple brilliance that is the medieval period, but it is being done in their own 21st century backyards.

"A good presentation that keeps students interested.  A fantastic medievalist that has great experience and humor."  - Hailey D. 8th grade